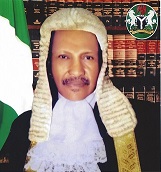 On 22nd of March 1951, a bouncing baby boy was born to the family of Honourable Justice (Chief) Akinwumi R. W. Rhodes-Vivour in Lagos Island. According to customs and tradition, he was named eight days after as Olabode Rhodes-Vivour.

Between 1963 and 1968, Honourable Justice Bode Rhodes-Vivour attended St. Gregory's College, Lagos. In 1970, he wrote and passed his Advanced Level Certificate Examinations and proceeded to University of Lagos for his undergraduate studies. He graduated from University of Lagos in 1974 with honours, and thereafter he was admitted into the Nigerian Law School, and was called to the Bar in 1975.

He has attended various international and local professional conferences.

He is a recipient of many excellent awards, prominent among these awards are:

Honourable Justice Bode Rhodes-Vivour is a social person, who sometimes relaxes and socializes with friends. He is a member of both Ikoyi and Islands Clubs of Lagos, and his hobbies are reading, watching sports, movies and documentaries.

He retired as a Justice of the Supreme Court in 2021, and was appointed a member of the National Judicial Council same year.

Honourable Justice Bode Rhodes-Vivour is happily married to Mrs. Adedoyin Rhodes-Vivour, and they are blessed with three (3) children.