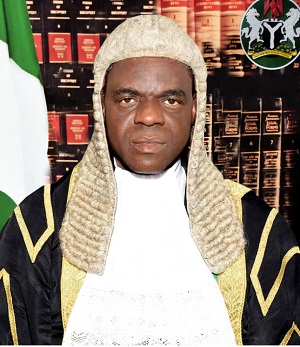 Hon Justice John Terhemba Tsoho was born on 24th June, 1959, in Mbaduku, Vandeikya L.G.A of Benue State. He began his educational sojourn in 1967 at St. Anthony’s Primary School, Chenge-Mbaduku, where he got his First School Leaving Certificate, and went on to attend St. Michael’s Secondary School, Aliade, where he obtained his West African School Certificate (WASC) in 1977. He also enrolled at the Murtala College of Arts, Science and Technology, Makurdi, where he sat for the IJMBE A\L in 1979, before proceeding to the University of Lagos, Akoka, Lagos, in 1980 where he bagged his LLB (HONS) in 1984. Hon Justice John Terhemba Tsoho was called to the Nigerian Bar after attending the Nigerian Law School, Lagos, in 1985.

He began his career as a Legal Assistant at Delta Ltd Port Harcourt, where he carried out the one year mandatory Service to the nation (NYSC) from 1985-1986. He had a stint at Sena Chambers in Gboko, Benue State, where he was a Private Legal Counsel in 1986, before settling for a career with the Benue State Judiciary same year, as an Inspector of Area Courts. From 1988-1996, Hon Justice Tsoho rose from the position of Magistrate Grade II to become the Chief Magistrate Grade I. he served as Director Litigation from May, 1996- October of same year. He was appointed the Substantive Chief Registrar, High Court of Benue State, October, 1997, a position which he held in Acting capacity prior to this time.

Hon Justice John Terhemba Tsoho was sworn-in as a Judge of the Federal High Court of Nigeria on 12th November, 1998, where he served illustriously, until his elevation to the position of Chief Judge, Federal High Court, on 13th December, 2019.

Hon Justice Tsoho has attended series of workshops on Law, Judiciary and Administration, both local and international.  He has also served on several Tribunals and Committees, some of which he chaired, and held many elevated positions in notable professional bodies around the globe.

He has a good grasp of Microsoft Office Applications and enjoys reading, jogging and listening to music. He is married and blessed with children.